This guide lists 10 of the most prevalent men’s issues in modern society.

During my years of experience as a life coach, I have been working hard to help men deal with or avoid these issues.

The problem is: men aren’t seeking help from mental health professionals at anywhere near the same rate as women.

That’s part of the reason why they disproportionately struggle with the following problems.

1. ‘Toxic Masculinity’ Harms The Men Who Display It Just As Much As Those Around Them

A harmful aspect of ‘toxic masculinity’ is the belief that it’s weak or shameful to seek emotional support from others.

That’s one of the biggest reasons why men are less likely to work with mental health professionals. Just 60% of men with diagnosable depression seek professional treatment (compared to 72% of women). Just a third of therapy patients are male.

On top of that, men are less likely to confide with loved ones during an emotional struggle, and those who do seek help tend to wait longer.

Many are raised to believe that ‘big boys don’t cry’. They are teased by friends or scorned by parents for showing overly negative emotions. As they grow older, they learn that ‘real men’ have to be strong, both physically and emotionally.

By the time they become adults, they may only be able to express negative emotions through aggression, reckless behaviour or drug abuse. This is the ‘masculine’ way to do it, or so they’ve been led to believe.

A lot of men believe being masculine means they need to tough it out on their own. But, in trying to do so, many end up falling deeper into their depression or addiction.

2. Men Are Less Likely To Have Deep Friendships 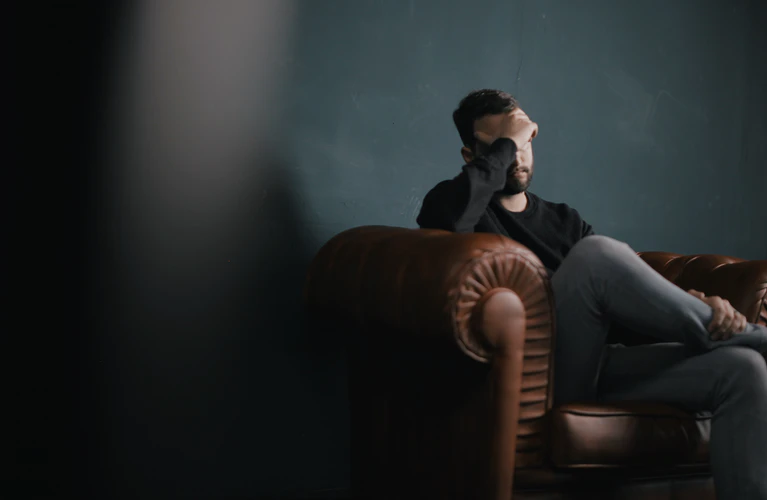 Even if they wanted to confide in a friend, men are less likely than women to have someone to share these deep conversations with.

This is partly due to the beliefs that it’s not manly to do so.

But it’s also because male friendships tend to be based more around shared hobbies and experiences, rather than emotional connection.

On top of that, as they get older, men are more likely to prioritise their family and work over a thriving social life.

That’s not necessarily a problem when they’re happy, but it may mean they have no-one to turn to when depression strikes.

Men often don’t want to burden their wives or girlfriends with their negative emotions, even when struggling with depression. Many fear that she will blame herself, or that it’ll put stress on their relationship in some other way, especially if they subscribe to the belief that men always have to be strong masculine leaders of the household.

Without a strong social circle, it’s easier for a run of poor mental health to deteriorate into more serious issues, such as those listed below.

In the UK, 8.7% of men are alcohol-dependent, compared to 3.3% of women. Official government statistics from the United States reveal that men are almost 50% more likely to engage in heavy alcohol use.

A lot of men will use alcohol to self-medicate, rather than seeking help from someone else.

The problem is: alcohol dependence tends to lead to a deeper spiral of mental and physical health issues.

4. Men Are More Likely To Be Drug Addicts

A separate U.S study concluded that men were almost twice as likely as women to suffer from substance abuse addictions.

Men are three times more likely than women to commit suicide, according to official data from the United States and the UK.

This decision typically stems from feelings of hopelessness, worthlessness and the inability to see a brighter future. Not seeking help from others can contribute to these feelings, as can social isolation. When one chooses to bottle up their feelings, they tend to fester and worsen. Suicide can become the final stop on this journey.

It’s suggested that men are more likely to suffer from feelings of extreme worthlessness during a financial struggle. This is highlighted by a correlation in unemployment rates and suicide rates.

Unlock Your Potential NOW!
Get FREE access to my self-growth area and achieve more fulfillment, success, control, and self-love!

Most likely, that’s because men still tend to believe in traditional gender roles, and that their defining role is to provide a better life for their family.

Feelings of purposelessness are also likely to fester in men after a divorce, for the same reason.

Therapy can help men to work through these feelings and regain their passion for life. It’s highly recommended for any man or woman who begins to feel suicidal. However, as we’ve already explored, men are far less likely to take this step.

6. Men Are More Likely To Lose In Family Court

Divorce is stressful for most people, but it can be especially hard for men to recover, as they are more likely to take a huge financial hit and lose custody of their children.

Mothers win five out of six custody battles in the United States, while similar figures have been reported in the UK.

It’s also suggested that men are more reliant than women on their spouse for emotional support. Wives tend to have close friends they’re willing to confide in. But when men divorce, they could well be losing the one person they could trust with their emotions.

Domestic and sexual abuse happens to both genders.

But, according to a GLA Conservative Group study, some 96% of sexual crimes against men go unreported. What’s more, the majority of male domestic abuse victims don’t report it until it becomes a crisis.

Could this be another case of men feeling too embarrassed, or like they would be considered weak for speaking out. Perhaps they do not trust their legal system to take their side in sexual or domestic abuse cases? These are just two common reasons a man may choose to keep quiet about their experience.

As mentioned though, bottling up negative emotions tends to make them worse, especially when a traumatic experience has occurred.

8. Men Are More Likely To Be Homeless

Some 71% of the homeless population in the United States are male. This rises to 75% in the United Kingdom and 84% in the Netherlands.

A number of the reasons for homelessness have already been mentioned in this article. Drug addiction. Losing big in the family court. Being unfit to work.

On top of that, it’s often suggested that extended family members are more willing to lend a helping hand to females.

9. Men Are More Likely To Die At Work

Men account for over 90% of workplace deaths in the United States. These figures are similar in most first-world countries with similarly dangerous working opportunities.

The jobs where employees are most likely to be killed are barely occupied by females. They often involve strenuous manual labor or are physically exhausting, as well as dangerous.

Yes, men choose to work these jobs and the dangers of specific workplaces may not be a men’s mental health issue by definition, but we shouldn’t underestimate the severe stress that working these jobs can cause. Over time, this can often lead to a huge deterioration in anyone’s mental health.

10. The Societal Shift Towards Feminism Is Leaving Men Feeling Under-Represented

In recent decades, society has addressed gender roles and shifted towards equal rights for women. That’s a net positive. But there are concerns that this shift has led to men’s issues being under-represented in the media today.

Andrew L. Yarrow, a senior fellow with the Progressive Policy Institute, highlighted this in a 2019 editorial for the Washington Post.

He said: “In the era of #MeToo, men don’t have problems; they are the problem. To some, even talking about men’s problems can brand one as tone-deaf and sexist. As a society, we don’t make it acceptable to talk about.”

Writing about male homelessness in 2013, ‘A Voice For Men’ writer Tom Golden made a similar point.

He said: “No-one wants to focus on the pain of men. People just don’t want to see it. Groups who try to help the homeless are probably very aware that if they advertise their client base to be male they are much less likely to receive donations and funding.”

It’s subjective whether men’s issues are covered enough in the media. But, to help you make your mind up about these concerns, let me ask you:

What Can You Do To Help Improve Men’s Mental Health?

As has hopefully been made clear, men’s lack of support and their reluctance to seek treatment plays a key role in a lot of their most pressing societal issues.

Yes, there have been media campaigns surrounding men’s mental health, but more needs to be done to change the traditional perception of what it means to be masculine.

I’m sure everyone would agree: it’s not unmasculine to seek assistance with your mental health. Supposedly, one in eight men have been diagnosed with a mental health problem. So, it’s hardly weird or strange for a man to work with a therapist in the modern day.

This idea still needs to be normalised throughout society though.

You can do your bit by looking out for your male friends and other men in your community. They may not have anyone else in their social circle who will do that! If you do see signs they are struggling, ask if they need to talk about it. Assure them they won’t be judged for sharing their experience with you. Recommend therapy, if necessary.

If you are struggling, don’t hesitate to reach out to a loved one or a therapist. Therapy apps such as BetterHelp or TalkSpace have made it more convenient and affordable than ever to do this.

These two relatively new services are highly-rated and can be just as effective as traditional therapy, provided you find a therapist you feel comfortable with. They’ll both let you change to a new therapist any number of times, at no extra charge.

Whatever route you (or your loved ones) decide to take to overcome these men’s issues, the most important thing is that you take it!

It could save your life.

Do You Have Any Questions About Therapy Or Men’s Issues?

I hope this article gave you a better understanding of the key issues facing the modern man today.

If you’d like to ask a question about therapy, depression or any of the men’s issues listed above, feel free to use the comments section below.

You may like to mention a personal experience, which is absolutely fine too.

It would be good to find out what you think about these issues, and how we should deal with them as a society.

Push-Pull Relationship – How To Break The Cycle