If you’re wondering how to tell if a guy is confused about his feelings for you, you’re in the right place. This guide features 19 telltale signs that a man doesn’t know what he wants from a relationship.

As a qualified life coach, I am well aware of the symptoms of this confusion.

In many of these scenarios, it might initially seem like this guy isn’t interested in a meaningful connection. But, often, he just needs more time to see if he really likes you.

By being aware of these signs, you can avoid throwing away a relationship that could still blossom into something really good.

Let’s dive right into it.

Contents hide
1. He Avoids Labels
2. He Avoids Difficult Questions About The Relationship
3. There’s Rarely Any Assertiveness In His Voice Or Actions
4. He Won’t Make Plans Deep Into The Future
5. He Filters Himself
6. He’s Stuck In His Head
7. He’s Emotionally Distant
8. He’s Physically Distant
9. He Doesn’t Introduce You To His Loved Ones
10. He Doesn’t Want To Meet Your Loved One
11. He Doesn’t Make Big Gestures
12. He Acts Differently Towards You In Public
13. He keeps you off his social media
14. He Treats You Differently In The Bedroom
15. He Shows His Love Indirectly
16. He Avoids ‘The L Word’ At All Costs
17. He Speaks Ill Of ‘Love’ In General
18. He Tells You About A Past Heartbreak
19. His Behaviour Is Generally Inconsistent
Any more questions about dealing with a man’s mixed feelings?

When a guy is emotionally confused, he might treat you like a girlfriend, but refuse to label you as one.

Men don’t want to make that decision until we’re convinced it’s the right one.

2. He Avoids Difficult Questions About The Relationship

If you begin talking about marriage, children or what he wants for his life in the future, you may notice he’s keen to avoid the topic. Some men don’t like talking about these things with women, until they know they really like them.

In fact, during the early days of a relationship, a woman would do well to get some men to discuss their feelings at all.

3. There’s Rarely Any Assertiveness In His Voice Or Actions

You can nearly always tell someone is unsure by studying their body language or voice tonality.

When a man is certain of his feelings, he’ll speak without hesitation about you and him as a pair.

If he’s unsure, he’s going to sound uncertain whenever he talks about the two of you. Watch for nervous twitches in his body language too.

4. He Won’t Make Plans Deep Into The Future

If he’s confused about his feelings, he’ll always find a way to wriggle out of committing to any event in the distant future with you.

That’s because he’s unsure if you’ll be together for that long. 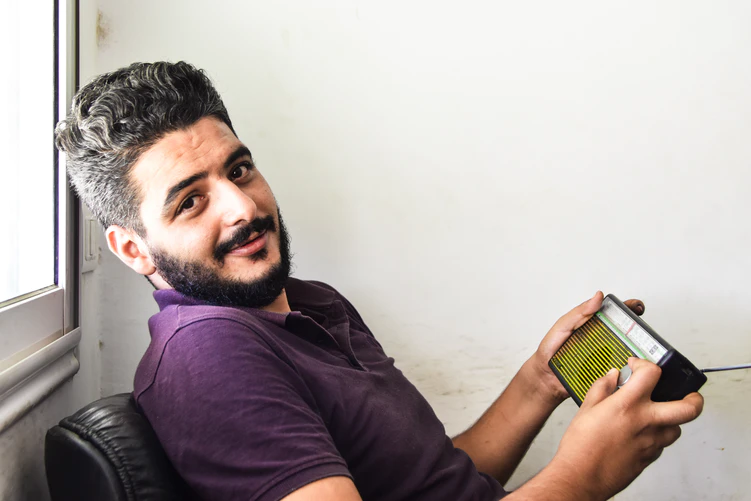 You may regularly sense that this guy is thinking about telling you something, but won’t say it. Perhaps you see that he’s about to say something, then changes his mind.

This is common when men don’t yet know how they feel about someone. In this case, they will often micro-manage their thoughts and actions so you don’t get the wrong impression of what they want.

When you’re together, you notice this guy always seems to be thinking about something else. Most likely, it’s because he’s desperately trying to micro-manage his behavior.

If he was more comfortable with his emotions, he’d be a lot more present around you.

Perhaps you’re trying to show love to him, but he doesn’t feel comfortable accepting or replicating it.

This doesn’t always mean he doesn’t like you. Sometimes, he’s just keen to take things slow, especially if he’s unsure where the relationship may lead.

He might be resistant to sharing negative emotions with you too. Men often need time to do this, even when they’re crazy about someone.

Instead of wanting to spend time together multiple times per week, like most loved-up couples, this guy might go missing for days or even weeks at a time. In most cases, this is a deliberate effort on his part.

Yes, he might be seeing other women, but he may also be trying to stay away so he can work out what he really wants.

This could also be his way of ensuring you don’t get your hopes up for a relationship too quickly.

9. He Doesn’t Introduce You To His Loved Ones

Most guys don’t want to go through the stress of introducing a woman to his friends and family, unless they’re sure she’s the right one. If you have barely met anyone important in his life yet, that’s a surefire sign he’s still confused about his feelings for you.

10. He Doesn’t Want To Meet Your Loved One

Most guys find it even more stressful to meet his woman’s friends and family. Many feel pressured to prove themselves as a worthy catch. If he’s not sure he even wants to be your catch yet, he’s going to find a way to avoid these meetings.

Unlock Your Potential NOW!
Get FREE access to my self-growth area and achieve more fulfillment, success, control, and self-love!

Love letters. Extravagant gifts. Fancy dates. These big gestures signal that a man is serious about committing to you and proving his worth as a stable long-term partner.

Most good guys won’t want to mislead you by making these gestures, if they’re not serious about you yet.

Instead, they’ll find more subtle ways to show their affection.

12. He Acts Differently Towards You In Public

Perhaps he’s really affectionate when it’s just the two of you, but tends to pull away around other people.

It might even feel like you’re dating another guy in public, such is the difference in how he treats you.

In fact, this is just another common symptom of a man being unsure of his feelings.

To a lot of guys, there’s more at stake when it comes to public displays of affection. Perhaps he’s worried about someone else seeing you two, and having to explain who you are, how much he likes you, where he sees things going etc.

A lot of men would prefer to avoid these questions until they’re certain what the answers are.

13. He keeps you off his social media

Maybe he never posts any of the adorable photos you take together, and doesn’t let you tag him in your photos.

This is for the same reason why he avoids public displays of affection. He’d rather avoid questions from his friends until he’s sure how he feels about you.

14. He Treats You Differently In The Bedroom

During good sex, a man is able to let go, escape his negative thought patterns and fully indulge in the passionate moments.

Perhaps during these moments, he makes you feel truly cherished. It feels like love-making, rather than something purely physical.

Then, shortly after it’s all over, he’s giving mixed signals once again. His stream of consciousness returns and he’s back to filtering his words and actions. He might not even want to cuddle up after sex or sleep over.

This is really common when a man doesn’t know what he wants from a woman yet. If you give him time, this intimacy will usually begin to surface in your everyday life too.

It could be worse. If he’s a selfish lover and puts in no effort to make you feel treasured in the bedroom, that’s a clear sign he has no feelings for you!

15. He Shows His Love Indirectly

This is a key difference between the men with no feelings and those who are confused.

The man who is confused will show his love indirectly, at least now and then, with small gestures. He’s just not ready to shout about it from the rooftops. The guy with no feelings rarely shows any real affection at all.

He might be showing you love with his actions, but not saying those precious words ‘I Love You’

That’s because ‘The L Word’ is a big deal to most men. Most won’t use it until they’re experiencing undeniable love towards you. If they’re emotionally closed off, some might still try not to use it, even then!

Ever notice him scoffing at soppy romantic scenes on TV, or making fun of his friends for how they act around their girlfriends? That’s a clear sign he’s disconnected from his emotions in general, not just around you.

When this guy begins to fall for a woman, he will usually resist it. He’ll try to do everything he can to hide it, but that doesn’t mean he doesn’t feel it.

18. He Tells You About A Past Heartbreak

When people have been hurt by a previous lover, it generally takes longer for them to open their heart again.

Perhaps he won’t explicitly ask for your patience, but it’s likely he’ll need it.

If he makes a point of bringing up his past heartbreak, that could be his way of saying he needs you to give him time.

19. His Behaviour Is Generally Inconsistent

This is one of the main things to look out for.

If a man is blowing hot and cold, it’s usually because he’s confused about what he wants.

When he knows what he wants, he’s generally going to be consistent with his behaviour.

Any more questions about dealing with a man’s mixed feelings?

I hope you like this article, and that it provides everything you need to know to understand where you stand in your relationship.

If you would like to know more about how to react in this scenario, see this article on mastering uncertainty in relationships. This guide can really help you deal with such a situation.

If you want to ask me a question, you can do so in the comments below.

I’m interested to hear everything you have to say on this topic, and will do my best to help you through your situation.

10 Ways How To Have Self-Control In A Relationship

Can A Relationship Work After Several Breakups

11 Signs That He/She Is Playing The Love Game